Inevitable Decay: Feeding the Soul of DisCOs and the Emerging Economy

This article has been written by Caitlin Cole.

The natural rise and fall of systems, economies and powers are inevitable. We have seen this happen through history with the Greeks, the Romans, the Church, India [1], but they all had one thing in common; huge disparities between those who have and those who don’t.

DisCOs are a possible and plausible catalyst for slipping out of today’s decaying ego-nomy and into an actual economy, creating true ecology within the economic framework. As the individualistic paradigm slowly decomposes, the chance occurs for a very organic and holistic paradigm to emerge from the decay, designed to fulfill needs that cannot be met under the current economic structure which does not consider said needs within its system, but instead as external to it.

DisCOs look to dance to the beat of this planet we inhabit, considering the myriad of relationships and their different components, creating the possibility of a self-sustaining and well-functioning ecosystem. It is more than evident that nature does not need humans to survive, so why not mimic nature within our different created systems to find such self-sustainability and natural equilibrium, which current economic structures lack.

So, how does a DisCO work anyway? How do all of its components interact and how can it use Web decay?

Let’s start by understanding the foundation, or the soil and bedrock of DisCO, AKA the 7 principles, which are: 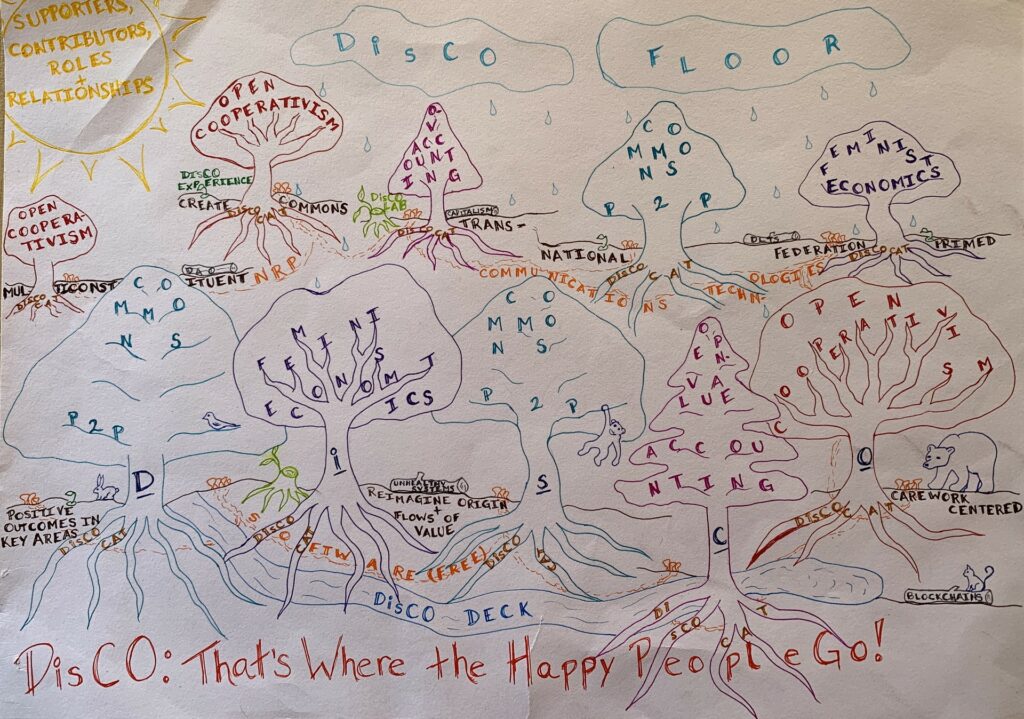 Solid and healthy foundations are key to the growth and sustainability of any organism, whether it be a living being or a created structure, and this solid, yet nurturing base of 7 principles creates a nutrient rich environment where DisCOs can flourish.

Also nurturing the soil are its 11 key values, embedded in the DisCO culture and structure: Balance in culture and structure; inclusive, relatable, and educational; non speculative or deterministic; multilayered/holonic; modular, but not prescriptive; DLT-enabled, but not dependent; online or offline? Onlife!; Copyfair-licensed; have viable, ethical business models; political; and fun or bust!

Deep in the soil are the DisCO’s root system, which carries the soil’s nutrients into the DisCO. First, we must understand that DisCOs are rooted in creating mutual trust and equal relationships among commoners. This is where the DisCO CAT (Community Algorithmic Trust) comes in. It is a platform where value tracking takes place, holding and encoding the collective’s goals and values. It is an alternative to trustless DLTs and blockchains. The DisCO CAT brings DisCO’s values to the forefront, making sure the roots are well grounded in said principles.

Ultimately, we might ask: How can DisCOs find sustenance in DLTs and blockchains, while not becoming dependent on them? It’s quite simple really, society at large still operates within a trustless paradigm, so DisCOs can use blockchains for external trustless relationships, while implementing the DisCO CAT for internal, DisCO-based relationships, lessening the potential dependency on blockchains. The DisCO CAT places trust in smaller nodes to help maintain certain social values through shared ownership, as opposed to giving the power of trust to decentralized nodes as blockchains do.

The DisCO CAT supports the DisCO, or trees in this analogy. Much like nature, there are a variety of trees, which is great! We don’t want only black walnuts (large corporations) poisoning the soil around them, to eliminate any and all competition. We want a beautiful, eclectic forest, to create a healthy and diverse Boreal, which guarantees sustainability. The DisCO looks to unite four of these cultural and structural frameworks, resulting in this economic Boreal, which include:

–        The Commons and P2P: These are put under one category, although they are not the same. Commons are community led, self-organized systems for long-term stewarding of resources, while Peer to Peer are nonhierarchical, non-coercive social relations within human networks that provide an infrastructure where acts of commoning can occur. Why is this important to a DisCO? Well, each community knows its needs best, so why have someone force their views on your needs? And what better way to do this than in a nonhierarchical and non-coercive fashion, where all are free to opine, be heard and vote?

–    Open Cooperativism: These coops are locally grounded, commons-oriented and transnationally-networked, with a focus on social and environmental work, thus fulfilling a few of the aforementioned principles, making it a great fit in the DisCO forest.

–    Open-Value Accounting: This form of accounting documents the contributions to a shared project for later analysis of the distributions of effort and labor involved to ensure a more just distribution of incomes, enabling value sovereignty, which is key to any DisCO’s accounting. It allows for DisCOs to regulate their market relations, and to avoid the alienation of common wealth and social relationships.

–    Feminist Economics: Feminist Economics has ushered us toward a more holistic approach to economics by including those less visible and often unpaid factors, such as care work, human connection, interdependency, and emotional aspects. This is central to the DisCO’s care work centered approach.

The different trees (movements) align with DisCO’s ideals, and help create a diverse and healthy forest, all interconnected through the DisCO CAT, helping to support the entire DisCO, mother trees feeding the saplings and dying trees feeding those around them. Everything has a purpose, and nothing is wasted.

Now that sounds great, but how do we connect these movements, creating one large, interconnected forest, nurturing, collaborating, and communicating with one another, as trees do? Much like the older mother tree feeds her saplings and warns of approaching danger, the DisCO Mothership is there to help nurture the DisCO Experiences where the denominated DisCO LABS lie.

How do these connections work? Well, similar to the fine hairlike root tips of trees joining with mycorrhizae to network and communicate with one another, DisCOs have their own mycorrhizae, which include MVP (Minimum Viable product), NRP (Network Resource Planning)[2], collaborative communications technologies and platforms (Trello, Loomio, Twitter, Mattermost, Clockify, etc.), and FLOSS. This fungal system allows for fluid communications and networking between different DisCOs, DisCO Experiences and LABS, supporting fluid communications, collaboration, value flows, wholly democratic decision-making, and the ability to fulfill being care work centered. The importance of quality connections via these channels cannot be emphasized enough, as they guarantee the proper dissemination of information throughout the entire DisCO, including its nodes, contributors, supporters, and less formal relations.

How are the DisCO Experience and LABs germinated, you might ask? Well, with the only thing plants (generally) need to germinate: water (represented by rainwater for example’s sake). The DisCO FLOOR provides the moisture needed for these seeds to sprout and saplings to grow, as it holds DisCO’s educational resources and legal tools to help cooperators create new DisCOs anywhere in the world. This program creates interactive DisCO governance models, guidance on existing legal structures for coops (we get to use these unhealthy structures as fertilizers for the DisCO, until future legal structures arise), and a directory of the DisCO cooperatives of the world. So along with our personal mycorrhizae, the DisCO FLOOR helps sprout and nurture those DisCO Experiences and LABs. It is like a sapling popping out of the sidewalk, it doesn’t fight or go against the sidewalk, but finds the cracks in the structure to imbed itself in, making the structure crack a bit more as it grows or more saplings pop up, until the structure crumbles because the sapling turns into a tree and the sidewalk crumbles, not because the sapling pounded its way in.

What’s rain without a bit of sun? Shining down on DisCO supporters and contributors, with their corresponding roles and relationships. Supporters, contributors, and their roles and relationships within DisCOs allow DisCOs to grow and reach their full potential and shine. Like the beautiful green of the sun-fed leaves, supporters help get the word out about DisCOs and provide feedback, moral support, monetary support, and recommendations for paid work, even though they are not a part of the productive work at the DisCO. Contributors, generally qualified professionals in the DisCO’s particular field, have no responsibility to the DisCO, but can help via pro-bono work to share with the DisCO. Other supporters of a DisCO may include grants, paid work, and financial backers. All supporters and contributors are important to the healthy creation and growth of a DisCO.

Then there are the roles and relationships of the Committed members at the DisCO, this means you freely and willingly sign the DisCO Commitment Statement, receive mentorship from an already committed member, join the Community Rhythms,  and review and discuss the roles you might be interested in and your availability. Like the animals in the forest, Committed members are roaming around, looking for food (ways to support the wellbeing of the DisCO and its members), eating any wood borers they might find along the way (the proverbial road blocks) to mitigate any possible damage to the trees (the DisCO’s frameworks). Like animals, committed members create an element of harmony within the DisCO. They focus on fulfilling the 7 principles, creating shared values, and co-creating and facilitating commons, which help the DisCO flourish and continue in time. Like with any relationship, the more you sow, the more you reap.

That said, what allows everything to flow, like a river? What better than the DisCO DECK! It is the value tracking platform that makes sure all components are well hydrated. Not only does this value tracking platform think in numbers, but it also accounts for care and reproductive work, giving value to all efforts. This online tool will carefully integrate Web 3.0, distributed ledger and blockchain technologies, to facilitate value tracking, accounting, and other support tools, with an inclusive economic viewpoint that empowers all members.

Everything seems so beautiful and harmonic at the DisCO, but like any natural system, decay is inevitable. It’s what you do with the decay that matters. Just because a DisCO does not agree with many of the unhealthy systems and tools available today, doesn’t mean those tools and systems don’t add value to the DisCO (or any other alternative economies). Quite the contrary, their compost offers nourishment, the possibility to utilize certain beneficial elements, giving them new meaning and life in the DisCO soil (7 principles). Capitalism is a key example of this, it offers DisCOs the use of fiat currencies, work for money (which is necessary for basic needs in the current social structure) and the possibility of economic growth. So, let’s use these elements of capitalism, while creating a viable alternative to the economic structure, by expanding a network of DisCOs to effectuate a paradigm shift, not just imagine it.

The DisCO’s beautiful flow of systems, resources, and principles allow for a more organic and holistic approach to economics, and, in turn, to life. Like any natural system, decay is celebrated and understood as a natural part of life, to be appreciated and used, not discarded.

[1] 2,000 Years of Economic History in One Chart
[2] Created by none other than Mikorizal!