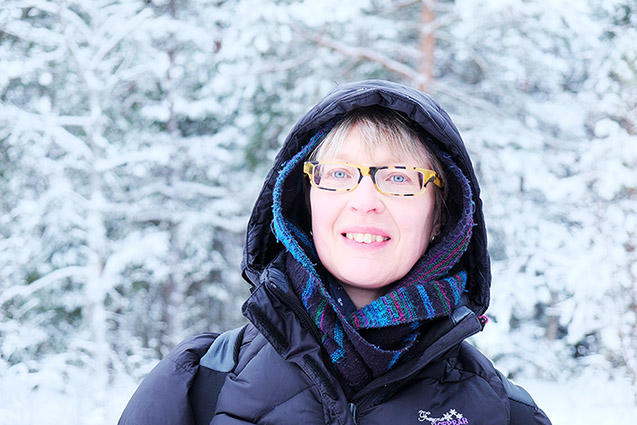 I’m Cindy, a postdoc researcher based in Finland. My research focus is on everyday design in material peer production, especially DIY makers who design, make, invent and innovate in fab labs and makerspaces. I’m particularly interested in how “sustainability” plays a role in makers’ techno-utopias. As a DisCONAUT I’m keen on learning about and examining feminist, postcolonial, postcapitalist, socialist and justice-oriented perspectives that re-politicize peer production, maker culture and the sharing economy to reveal how power is held and distributed. I also teach design-for-sustainability, write about urban activism and carry a camera around incessantly.

What is your favorite smell and why?
My favourite smell is definitely sawdust. It reminds me of being a kid and playing around in our woodshed, making my own toys from pieces of wood and later doll furniture – and later still, real furniture during my BA and MA design degrees. I have promised my DisCO comrades that when the collapse comes and the sh*t hits the fan, they have to keep me around because, while I’m pretty useless at other survival skills, at least I’ll be able to build and repair the furniture.

Have you ever been told you look like someone famous, who was it?
A friend always used to call me John Lennon and swore I looked exactly like him (I guess if he were a woman). I’m still not sure if it’s only because I used to wear Lennon-like little round eyeglasses.

Did you have an imaginary friend as a child? What was their name?
Not exactly an imaginary friend, but when I was a child my father always referred to a ghost who lived in our basement called Alvin the Friendly Ghost. He was only joking about it. When my parents moved into an old folks’ home decades later, I stayed alone in the house as it was being emptied. Late at night I was sure I heard voices downstairs in the basement. I told my sisters, nieces and nephews, and then all kinds of stories came out about how they, neighbours, appliance repairmen and others, told eerie, uncomfortable stories of hearing voices in the empty basement.

What’s the worst haircut you ever had?
A terrible cut and perm when I was about 10 that gave me a full head of curly locks. It may have looked cute on Shirley Temple, but I hated it on me.

If you could add a word to the dictionary what would you add and what would it mean?
“Commons-wash”, a word whose meaning is obvious, I assume, as is the need for such a term.