This article has been written by Timothy McKeon.

If you ever needed a wake-up call about the dangers of capitalism, the past year is sure to have delivered. Though it is exciting and inspiring to see more and more people standing up against the greed, racism, violence and sexism of the capitalist system, it comes at a frightful cost. How many capitalism-induced-and-perpetuated pandemics will we have to endure? How many deaths until enough people come together to dismantle this system that has funnelled trillions of dollars right into the billionaire class while countless people lose their jobs, homes and lives?

We all know that this is nothing new. In one way or another, most of us have experienced the feeling of selling our soul or sacrificing our principles for a paycheck. We expect so little of our workplaces while they demand so much of us, and very rarely does anyone have the luxury of questioning this dynamic. Many people are driven to alternative working practices because of how much disillusionment capitalism creates in the very workers whose labor upholds the system.

“For me it was over 20 years of disappointment that made me turn my back on ordinary working practices. I feel that most of my bosses have let me down for many different reasons, mostly related to fairness and care, and I’ve been toying with the idea of writing a blog titled ‘To all the bosses that have let me down’ come January 2021.” – I.L.

It’s very difficult to care about a job that cares so little about you. Sometimes the only way to get through it is to focus on small, personal victories that carry you through the day and remind you that other possibilities do exist. Some of us from Guerrilla Translation, the original DisCO LAB, first bonded over stories about moments of personal protest that sustained us in the capitalist world until we found each other.

“I worked in a call center for Apple’s customer service (ironically called AppleCare). I was fired after just 4 months, when they started eavesdropping on my calls and finding out I had been offering life advice and bonding with the customers over the phone: ‘The price of these Apple products is just obscene, and you can’t imagine how depressed everybody working here is. This is a soul-crushing machine.’  The supervisors were really really mad. The customers loved me though. Before returning my badge, I printed a copy of this book and left it at the BookCrossing section of my department.”  – S.E. 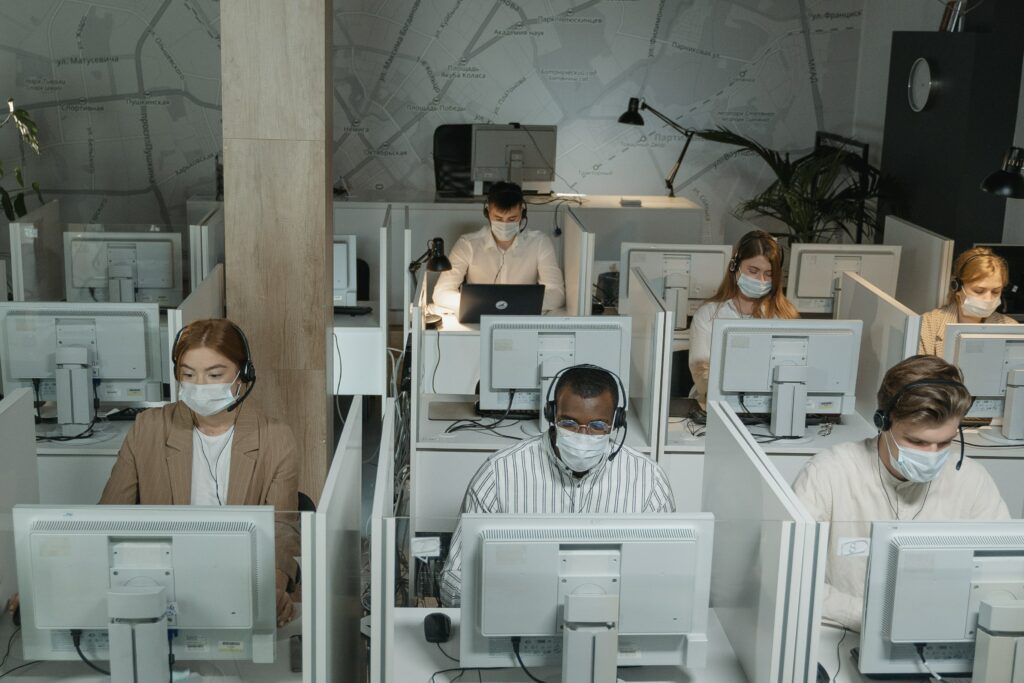 Photo by Tima Miroshnichenko from Pexels

Incidentally, printing out anti-capitalist literature seems to be quite a common form of workplace protest, though maybe this isn’t so surprising among a group of translators and word-lovers.

“I tried my hardest to get fired from the GAP. When my manager asked if anyone had seen a customer leaving printed-out articles about GAP child labor abuses around the store, I was quick to correct her, ‘No, that was me! Isn’t it awful?’ I guess she just didn’t know how to react because I still had my job at the end of the day. Later that week, we unpacked a box of sweaters with child-size footprints on it.

After that, I still clocked in but stopped doing any actual work. I brought books to read instead of swiping credit cards or folding khakis and I used the store’s phone like my own personal line. ‘Is everything OK?’ my manager asked one day, ‘You’ve been on the phone for over a half hour!’ It was sweet of her to be concerned. ‘Oh, everything’s fine, this is just a personal call,’ I replied without a lick of shame. ‘Oh…’ her confusion grew, ‘Well you can’t just take personal calls at work!’ I smiled, ‘It’s OK, I’ll be off in another 5 minutes, thanks!’ She walked away, stunned at my impertinence.

Eventually I finished gossiping on the phone and was informed by the manager that she would have to give me a disciplinary warning. ‘I totally understand, no problem. Just do what you gotta do,’ I said in a comforting tone. Perhaps too comforting, as she never did fire me in the end. After another month or so of basically just hanging out at the GAP, better opportunities came along and I was able to cast off my khakis for good.” – T.M.

So often it takes these moments of defiance to actually feel human while at work, and this automatically puts our own humanity at odds with our jobs. Gestures of care and self-preservation became acts of rebellion. Even building relationships with and treating your coworkers with compassion and solidarity can feel like something you need to get away with.

“I worked in exports for many years, enjoying the actual human factor, but I had a hard time with disrespectful bosses who paid low wages for hard work. After a while my motivation dwindled and I did just the bare minimum. And then I got initiated in Reiki! My colleagues knew and would ask every once in a while if I could practice on them. I would usually say I didn’t have time or I was too tired after work. Then one day (in an office where the boss/owners had put in cameras to watch us while we worked), I thought, ‘Hey! Why not do it here?’ And that’s how I began doing Reiki sessions at work, ignoring the fact that the bosses were watching … and they never said a word.” – C.C.

So sometimes the powers that be actually just leave us alone when we take a stand and do what we know is more important than the work at hand or when we go against the grain in a way that feeds the soul. After all, when you take a stand, you’re teaching a lesson, and with any luck you’ll make your bosses realize that you often know better than they do.

“I usually just blended in at my jobs but sometimes took things to another level. Once I was trusted with hiring my own replacement. That workplace was sick with the toxic narcissism of the two people at the top. I screened a number of cover letters, and one stood out for its utter madness and creative risk-taking.  The author clearly had no f*cks left to give, and no relevant experience (a non-negotiable requirement). She cited her ability to teach mice to square dance, among other things, and closed by claiming to have crocheted all her own clothes. She was shocked when I called her in for an interview, where I told her that this was a demanding workplace and that I had confidence in her abilities because of the confidence she showed in sending such a letter, and I wanted her to be employed, not suffering. Some months later, one of the bosses found out about this interview process and sent me a note praising me for my selflessness in hiring someone who ‘surpassed my own competence in the role’. So yeah, she got the last word, but it was worth it.”  – A.M.U. 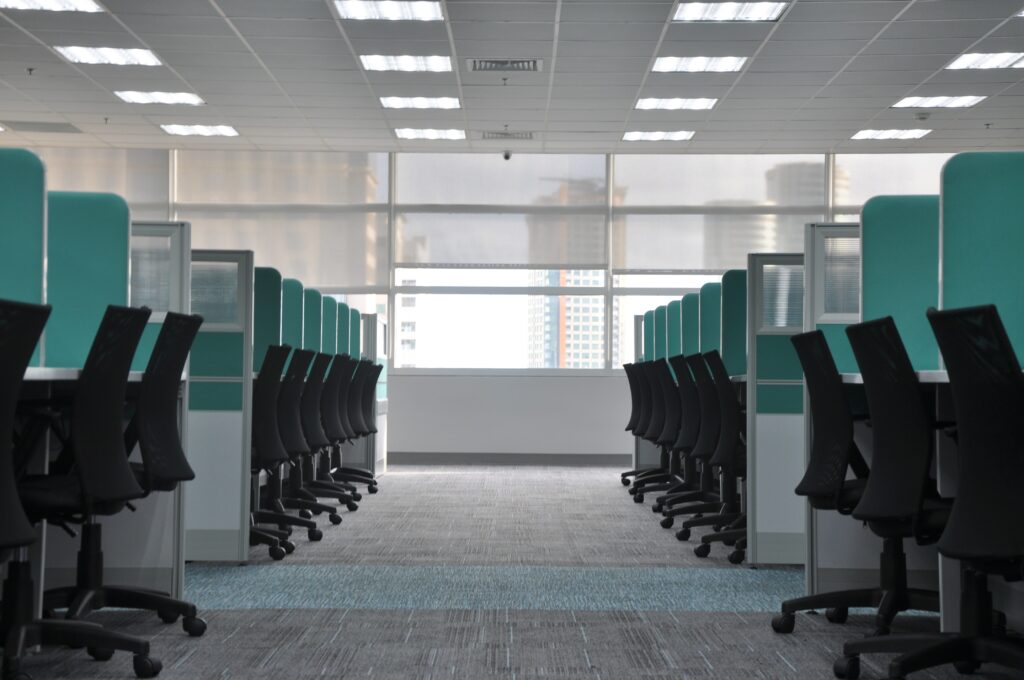 Photo by kate.sade on Unsplash

It seems clear that our attraction to the absurd, when stuck in a lifeless soul-crushing job, is a way to acknowledge the absurdity of capitalism, the absurdity of expecting people to just indefinitely and obediently accept a fate that is pitted against them and that seeks to extract as much value as possible from the worker while giving that same worker just the bare minimum to keep them coming back. It’s an absolute joke and should be responded to in kind.

“In Spain most film and TV is overdubbed. I interviewed at a sound studio. The big boss man said he wanted to play me a VHS tape in his office. Expecting one of those ‘Son, if you’re watching this, it means that I’m dead…’ deals, boss man proceeded to play … wrestling videos! To be precise: the 1998 season of WCW Monday Nitro. The boss, Mariano (an amazing Spanish name that contains references to Mother Mary and anuses) simply asked, ‘You’re telling me you actually understand what these maniacs are saying? GREAT! You’re hired!’

Most TV or film translations are made from transcriptions or scripts. NO ONE dared transcribe the wrestling. I went home and translated a bunch of episodes directly by ear, subtly upping the intentionally unintentional lulz. The studio made some edits but my translation was kept practically unchanged.

Soon lighting struck! ‘Hmmm, I’m the only person in the whole company who actually understands these vids! Sooo… no one can check if I’m actually translating what they say or if I just, just… What if I just make it all up!!!???‘ This sudden situationist action in the workplace would require some careful scheming. I’d start by changing wrestlers’ nicknames to reflect persons that I liked or hated. I’d troll other friends’ behavior with ‘funny to anyone who hears’ but ‘terrifying when you know I’m referring to you each Saturday night on Spanish NATIONAL TV’ references. And I got away with this for two full years!“– S.T. 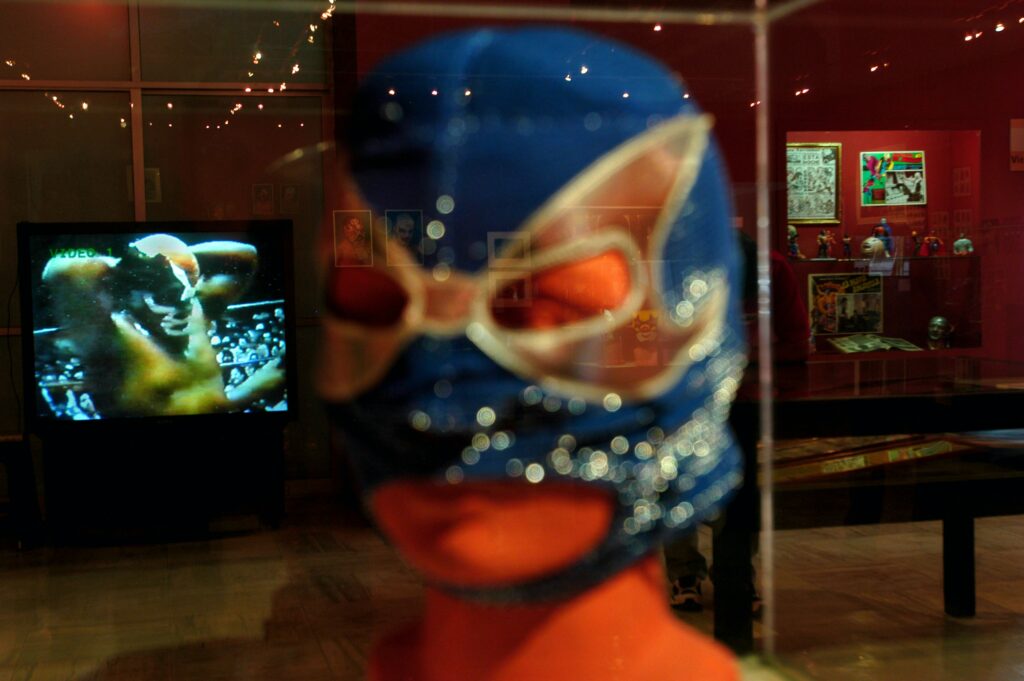 Photo by carlos aranda on Unsplash

And believe it or not, that was the initial seed that would eventually grow into Guerrilla Translation and DisCO. In our own unique ways, we’ve all succeeded in failing at capitalism, and this is what has motivated us to find more human ways of working, and eventually success on our own terms.

The tragedy is that most of us are backed into a wall where we don’t actually have any options for alternative styles of employment. Even worse, we’re then gaslighted into feeling that we should be thankful for the abusive and exploitative jobs that we can get. This is the trauma perpetuated by a system that tricks you into feeling the need to keep your head down and work your way up. It’s one of our primary motivations for putting so much time and effort into experimenting with heterarchical ways of working together that are based primarily on care. It’s the shared experience that makes everyone look at DisCO and think, “Of course! Finally!”

We share these personal stories for the laughs, but also recognizing that every little act of resistance is important. If inside jokes dubbed over Monday night wrestling can snowball into a cooperative that is radically changing the role of care in the workplace, then it’s our responsibility to see what happens if we keep resisting, keep laughing in the face of capitalism and continue supporting and caring for each other as best we can.