Book Review: Groove is in the Heart: The DisCO Elements

This article was written by Kevin Carson and was originally published on Center for a Stateless Society (A Left Market Anarchist Think Tank and Media Center). Download the DisCO Elements here.

As the Introduction explains, the first installment of the DisCO Trilogy — The DisCO Manifesto — was about ” the reasons behind DisCO, its roots and its proposal for a radically different “Future of Work” based on the commons, cooperativism, P2P and DLT Tech and Feminist Economics.” DisCO Elements, on the other hand, is “all about how-to.” The authors also encourage reading the chapters out of order to suit your own interest, since the book’s organization is modular and the chapters are stand-alone. And the contents are heavily hyperlinked, which means you’re likely to get pulled into multiple parts of the book very quickly — what they call “rabbit-holing” — regardless of where you start. The nominal reading time is about an hour, although if you stop to watch all the embedded videos and go to the outside links you could easily lose several days.

The first chapter, “How to Account For the Future of Work,” considers the possible outcomes of three major technological trends: “automation, remote working, and the knowledge economy.” Projections of freedom from drudgery, fifteen-hour work weeks, etc., as a result of technological progress have been common since at least the time of Keynes — and so far such predictions have failed to materialize. Unfortunately, the question is complicated by the fact that technology is never neutral. Technology enables affordances, or the qualities that define its possible uses. Its outcomes are determined at the design level by “architects” — coders, designers and researchers — and always according to the will of its investors. It may be created to serve those interests, but it can also simply be appropriated and turned to the benefit of the powerful.

This is exemplified, among other things, by the history of blockchain-based Distributed Autonomous Organizations — DAOs — whose problematic features the DisCO was developed to address.

Chapter Two goes on to describe the basic features of the DisCO, and is largely a recapitulation of material from the DisCO Manifesto. Specifically, the DisCO is designed to be more horizontal, P2P-oriented, cooperative, and socially conscious than the DAO. In contrast to the predominant techbro culture of DAOs, “DisCOs design their accounting and governance structures as convivial tools from the bottom up.”

Rather than outsourcing our futures to automated systems easily locked-in to a self defeating profit motive or limiting pro-market solutions, we envision a new social-ecologically oriented federated workforce that lends its productive energies and creativity, toward restorative ends.

To answer the cliché question we posed in the first chapter: what is the future of work? To us, it’s restoration. We need to restore our relationships to our living planet and to each other. This is the work of our lifetimes, to carry forward in future generations.

Chapter Three summarizes the principles and values of DisCO organizations — in other words, the primary topic of the book. The DisCO principles include the seven Rochdale Cooperative Principles:

Unfortunately these principles have been observed in a largely pro forma manner by most of the cooperative movement, with the typical cooperative operating mostly according to corporate capitalist principles. So DisCO adds seven more principles, distilled in large part from Ostrom’s eight principles of commons governance and the twelve Permaculture principles: 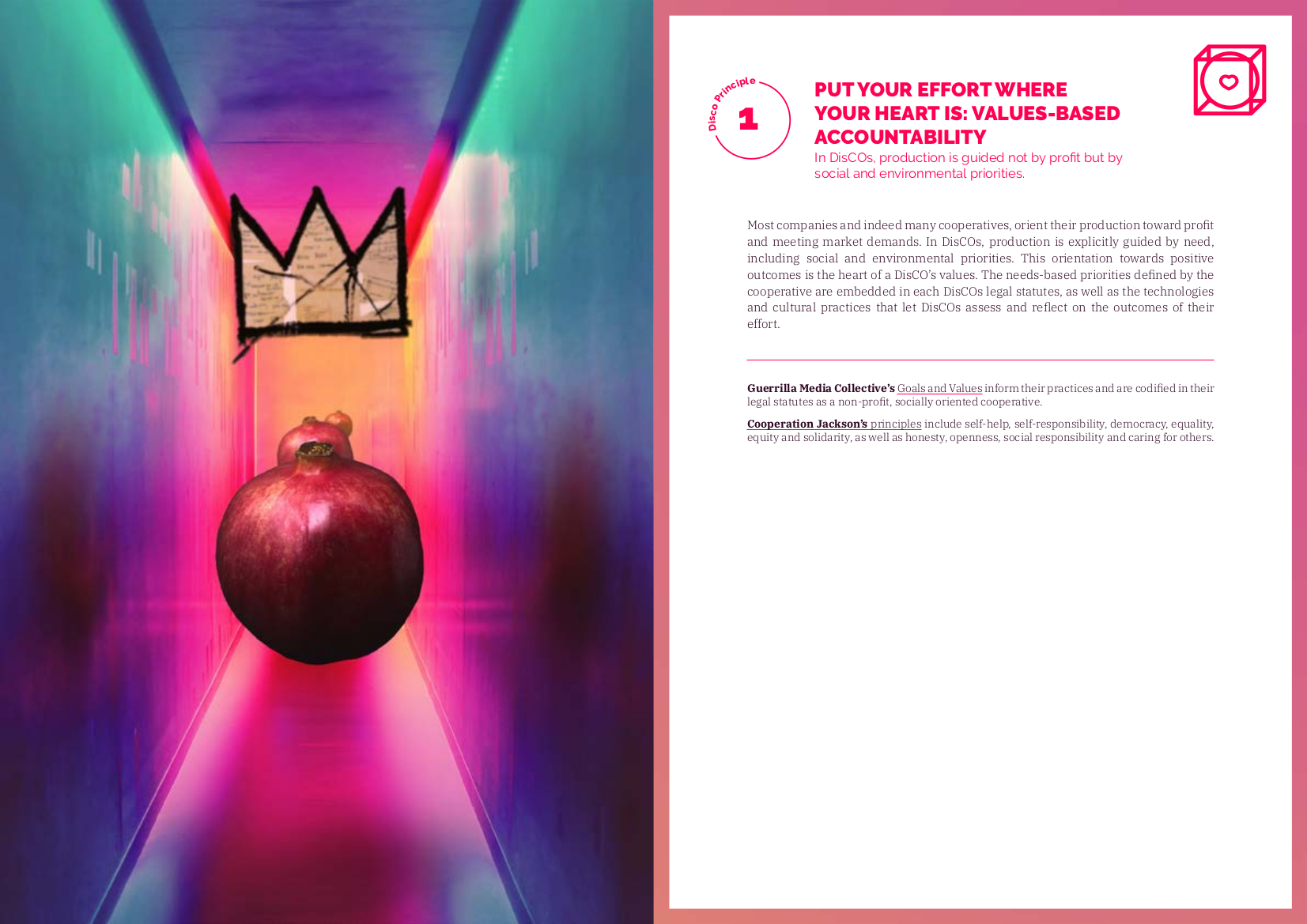 Chapter Four goes into detail on the practice of commons governance, as pioneered by the Guerrilla Media Collective (the first DisCO LAB), to make it clearer what the previously enumerated principles and values mean in concrete terms. 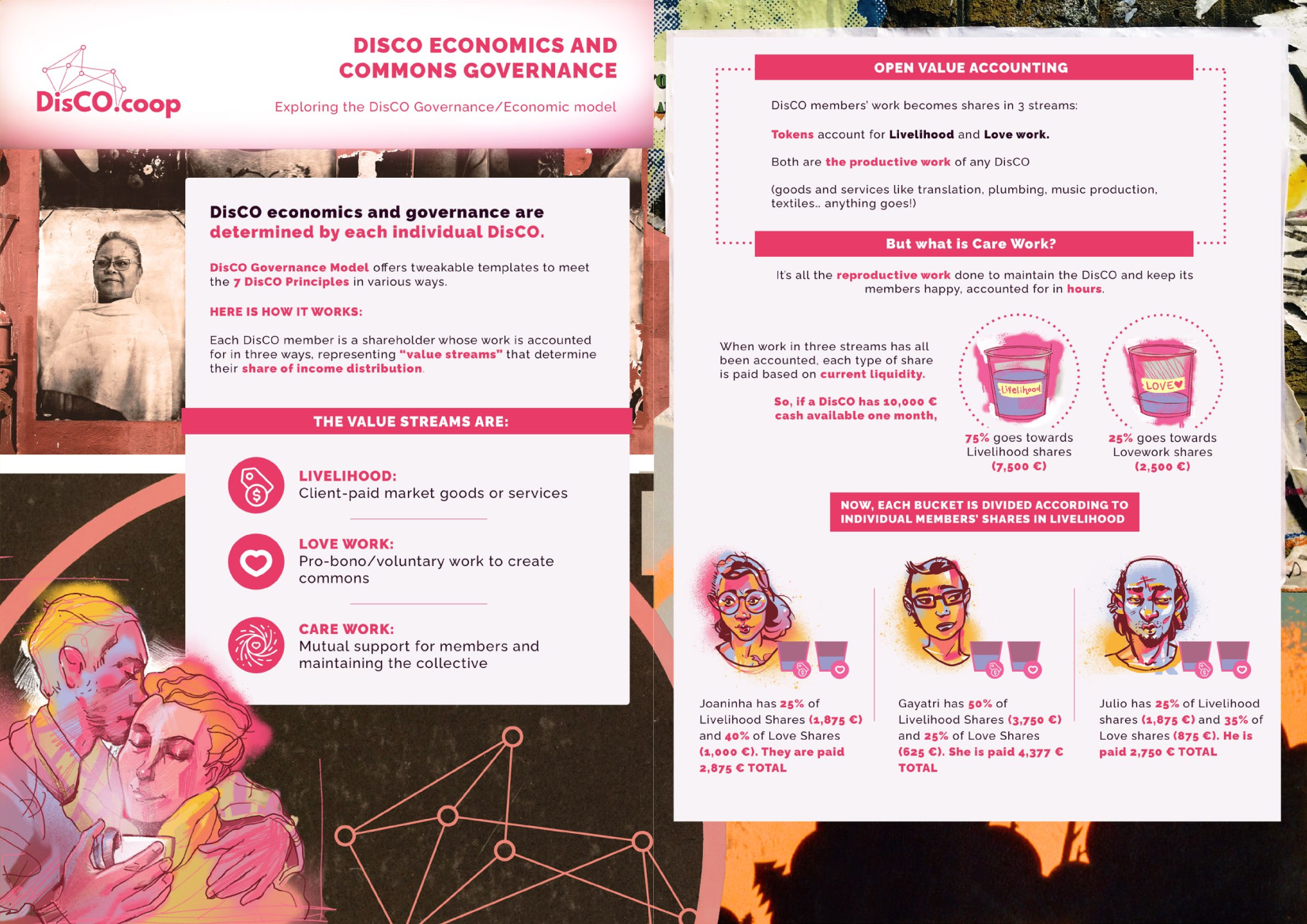 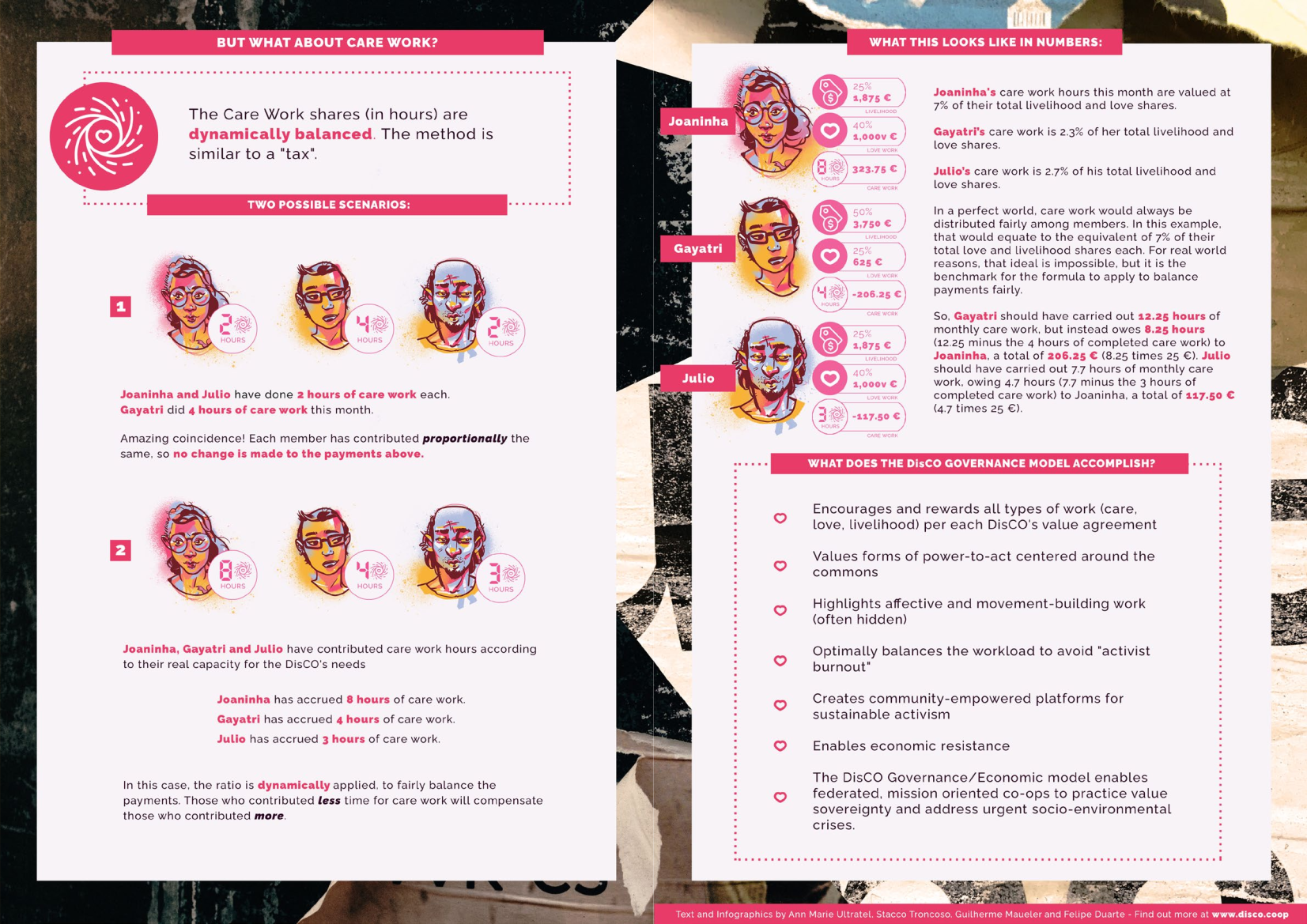 Chapter Five briefly covers the DisCO CAT (Community Algorithmic Trust) modular software platforms and apps that enable any group to build their own DisCO. However, this is a topic reserved mainly for the third installment of the trilogy — the Pink Paper — forthcoming next spring.

Care always trumps “the numbers” in the end. Once we take pains to meet all fiscal/legal obligations, we’re left with human considerations and these take precedence. The DisCO Governance model and tech in development include ways to gift to others. Beyond that, we are also exploring the concept of UnDisCO: What happens when the collective lets go of protocols and ratios, and just shares based on abilities and needs? All these affections, nudging thoughts and conversations are what inform DisCO in both its storytelling and technological design. Like the Zapatistas say, we learn by listening quietly to each other, and only then can we feel empowered to speak with the world.

These things are more easily said than done, which is why Chapter Six is a long one: it involves a lot of introspection on where they’ve succeeded and failed in building their culture of care, and the lessons they’ve learned along the way.

The final chapter, Chapter Seven, is about the DisCO vision of the future — namely, “for DisCOs to grow and flourish across the economy.” The chapter is mostly a laundry list of policy proposals, operating on the assumption of the Partner State model in which the state functions mostly as a support platform for self-organization within civil society.

DisCOs are designed to be developed from the bottom-up. To create the desired cooperative economic counterpower, they will need to find each other and network through agreements. Supportive legal and policy frameworks would greatly enhance some of the potentials described in this publication….

DisCOs are designed to be autonomous in operation and not State-dependent. From a legal standpoint, cooperatives are private entities. But in the interest of long term remediation — social, economic, environmental — governments would be called upon to prioritize support for generative, restorative industries, and to divert funding and subsidies away from harmful, extractive and exploitative ones. If DisCOs, to paraphrase the IWW, aim to ‘build the new world in the shell of the old’, it must be acknowledged that the old world still holds vast amounts of power. The affordances of radical, prefigurative projects such as DisCOs will always be affected by the constraints of existing systems, including public policy.

What DisCO proposes is radical economic subsidiarity: distributed production and economies not of scale, but of multi-faceted scope….

While compatible with existing economic forms (i.e., co-operatives, the Social Solidarity Economy, etc.) and actively working to subvert the right-libertarian bent of most blockchain economics towards associationist ends, DisCOs also pave the way for decommodification and non-market exchange thanks to their commons orientation. They train us to resist and create capacity for whatever the future may hold.

Finally, DisCOs place a new and more empowered political subject at the center. Beyond the precariat, DisCOs exist to care for and reproduce commoners — understood as people in communities who steward their own resources according to the rules, norms and values they set for themselves. With the sustenance of 2.5 billion people depending on natural resource commons and an abundance of commoning practices taking place in digital spaces, mutual aid groups, food production, cohabitation and fablabs and makerspaces, the logic of commoning is evident in the ongoing Covid reality. DisCOs catalyze these practices into a feminist economic and care-oriented framework, paving the way for pervasively sustainable commons-based alternatives to the dominant order.