Deliberate Dancing: A Critical Investigation of DisCOs’ Potential to Re-Politicize the Economy

We are honored to present Deliberate Dancing: A Critical Investigation of DisCOs’ Potential to Re-Politicize the Economy, as Social Entrepreneurship & Management Masters Thesis authored by Danny Nielsen and Olivia Grazzini for Roskilde University. The thesis analyses DisCO’s from a political economy perspective and a Polanyian framing.

You can read or download the PDF here. In this post we’ve extracted the Abstract and part of the Introduction. For commentary on the paper from DisCO.coop members and the authors, scroll down to the comments section. 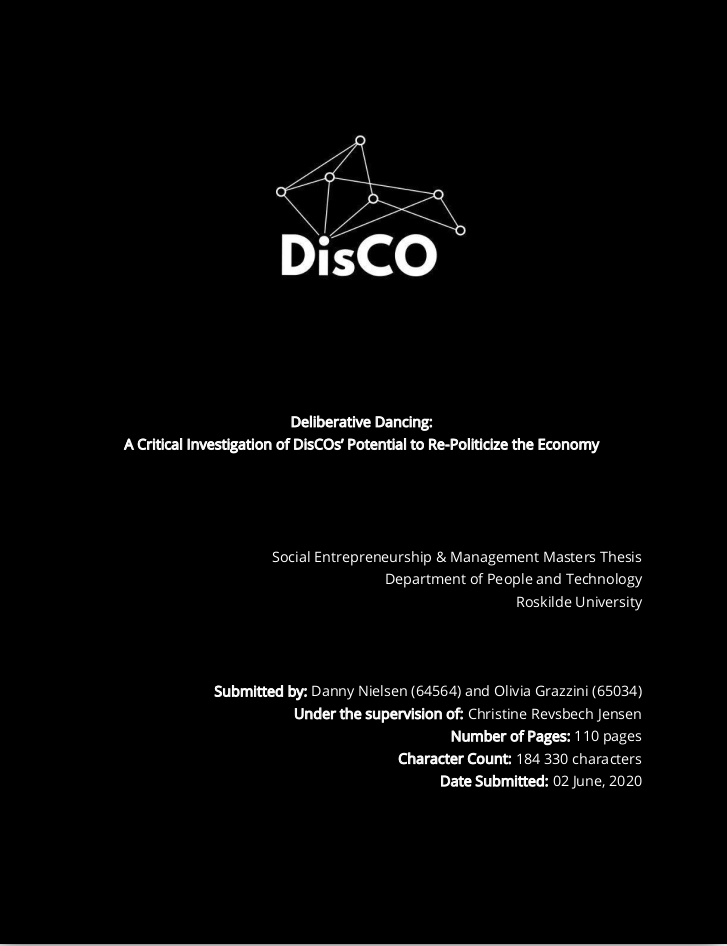 Over the last decade, capitalism has received widespread criticism due both to its inability to meet humanity’s basic needs and its inability to mitigate detrimental effects. Consider both the widening wealth gap and the climate crisis. Indeed, there seems to be a growing consensus that as an economic system, capitalism is grossly unsustainable-socially, environmentally, even economically. In our view, one of the biggest drawbacks of capitalism is that it separates issues of politics from the economic sphere, in other words, subjugating society to the market, which has thus created the hegemonic market society we live in today. Since any reform attempted through the political sphere (i.e., regulation) seems to be thoroughly ineffective in addressing this issue, this paper instead focuses on alternatives on the organizational level to re-politicize the economy.

This paper then introduces Distributed Cooperative Organizations (DisCOs), a relatively new, innovative organizational model, with potential to re-politicize the economy. In order to critically analyze this potential we draw on the DisCO Framework, or governance model, to determine whether or not it recognizes alternative values and motives, employs alternative mechanisms of economic activity, and embeds democratic norms and institutions. While we do find evidence of this within the DisCO Framework, we also provide some critique of the model, especially it’s orientation towards deliberative democracy, which we find an unsuitable model of democracy given their claim to promote radical workplace democracy. We conclude that the DisCO Framework indeed holds potential to re- politicize the economy. However, the extent to which this holds true is very much dependent on further developments of the framework, if any, and whether new DisCOs emerge, as well as how the model is then adapted by these future DisCOs.

The purpose of this thesis is to explore the role of social entrepreneurial organizations (SEO’s) in re-politicizing our present-day economy. Drawing on Distributed Cooperative Organizations (DisCOs), we seek to understand the ways in which this specific organizational model challenges dominant norms through more democratic forms of organization and governance.

Our interest in politicizing the economy is primarily driven by our belief that raising the question of politics inherent in the capitalistic economy, such as the assumed primacy of financial capital over all other concerns, is necessary for achieving a more sustainable economy, in environmental, social and ultimately, also in economic terms. Our choice to focus on the DisCO Framework is partly a practical concern. While we believe that policy is important for the long-term goal of achieving a more democratic and sustainable economy, we also believe that this is a second-order concern. Put simply, we believe that if we build the right organizations, the right policies will come. However, this choice also reflects what we hope to contribute to the field of social entrepreneurship and social sciences in general. How governance models such as DisCO, which explicitly call for a more democratic economy, can re-politicize the economy is, we believe, both central to the framework’s aims and a question that merits further research.

There is growing consensus that capitalism is unsustainable and that something simply must change. It is not hard to point to the various reasons for this critique; from growing fears about the status quo’s inability to tackle climate change, to rising inequality on a global level, to the continual failure to achieve acceptable living standards in the Global South, and to the pressure of an insurmountable wealth gap between the elites and the working classes in advanced economies.

However, actually achieving a change to the status quo requires dismantling entrenched interests and taking on a system apt at perpetuating itself. Since regulatory and policy approaches have largely failed to achieve this change, we contend that it is time to identify, research, and implement alternative methods and strategies that may better drive systemic change.

Given that one of the central arguments for the status quo is that “There is no alternative”, a phrase adopted by Margaret Thatcher as a justification for her agenda of neoliberalism and deregulation, we see it as paramount to challenge this supposed truism, if any real change is to occur. This more so than anything lies behind our interest in the question of alternative governance models’ ability to re- politicize the economy. This is, to us, not a question of increased legislation or regulation, though both have a role play, rather we are interested in alternative governance models’ ability to raise questions of the politics inherent in the economy; its power structures, who benefits from its current form and whether this, in a normative sense, is right.

Economic matters have for far too long been isolated from politically charged questions by a technocratic belief in economics as a value-free field, the notion of so-called “positive economics”, by an insistence on a narrow definition of economic liberty as the foundation of all liberty and by a dominance of financial capital as the sole measure of economic success. It is these notions that we wish to call into question, not so much because we believe that we hold the answers, but rather to demonstrate that alternative economic systems can exist, and that these alternatives may be the solution to the problems listed above. At the very least, we believe these alternatives deserve a fair hearing, currently being denied them by the insistence that there are no alternatives.

In what ways can organizational models such as the DisCO Framework re-politicize the economy?

Contribution to the Field

Our central interest in this paper is to investigate the capability of the DisCO Framework to re-politicize the economy. As such, we hope that our work will be of interest not only to academics within the field of social entrepreneurship, but also social entrepreneurs and innovators who wish to pursue similar goals or develop

similar organizational structures that can look beyond the monolithic focus on financial wealth and personal gain that characterizes the market economy.

Therefore, this paper is primarily aimed at organizational actors interested in re- politicizing the economy through the promotion of more democratic and inclusive organizational frameworks, thereby actively challenging the hegemony of capitalism. However we also wish to engage with and add to the ongoing academic debate surrounding social entrepreneurial organizations (SEOs) and their potential for radically transforming our global economy, on the basis that this noble goal requires a strong collaboration between theoretical and practical experiences and knowledge.

Additionally, we hope that our work encourages an interest in the more radical side of social entrepreneurship and social innovation, both among academics and practitioners. While we ardently advocate for diverse perspectives in the field of social entrepreneurship, we believe that as the field has developed, it has been far more focused on approaches that either seek to reform or adapt to the status quo, to the detriment of approaches that directly challenge the status quo.

While the term ‘innovation’ today is more closely associated with technological developments, the term first found wide usage as a descriptor of radical religious and social doctrines, similarly the first to wear the label of ‘social innovators’ were radicals like Saint-Simon, Blanc and Proudhon (Moulaert & MacCallum, 2019). It is our hope that our work here can help rekindle interest in this radical side of social entrepreneurship.

Finally we do believe our inquiry here has the potential to add a few key insights to our field. While we have drawn inspiration from a number of thinkers, both within and outside the field of social entrepreneurship, we are, to our knowledge, the first to address the question of re-politicizing the economy through organizational structures. In addition, the object of our inquiry, the DisCO Framework is both a novel organizational model, and a relatively recent development that has yet to receive serious scholarly attention, which we thoroughly believe it deserves.

Read Deliberate Dancing: A Critical Investigation of DisCOs’ Potential to Re-Politicize the Economy

1 thought on “Deliberate Dancing: A Critical Investigation of DisCOs’ Potential to Re-Politicize the Economy”